My figures live in a mansion

“Megumin strolling around in front of her parties new mansion.”

I know this is not the real mansion from the show but I think this castle from a time when Maria Theresa ruled the nation fits the scenery nicely.

This rather large 1/7 figure of Megumin was released in 2019 by Kadokawa as an anniversary edition of the light novel imprint Sunīkā Bunko. Back then, there was already a fair share of Megumin figures published but a nice, tall figure featuring her classic outfit from the show was still an eyecatcher. I did order her together with the Aqua 30th Anniversary release and even if the water goddess is the more dynamic and better crafted figure, Megumin of course is much more versatile when it comes to taking pictures of her. 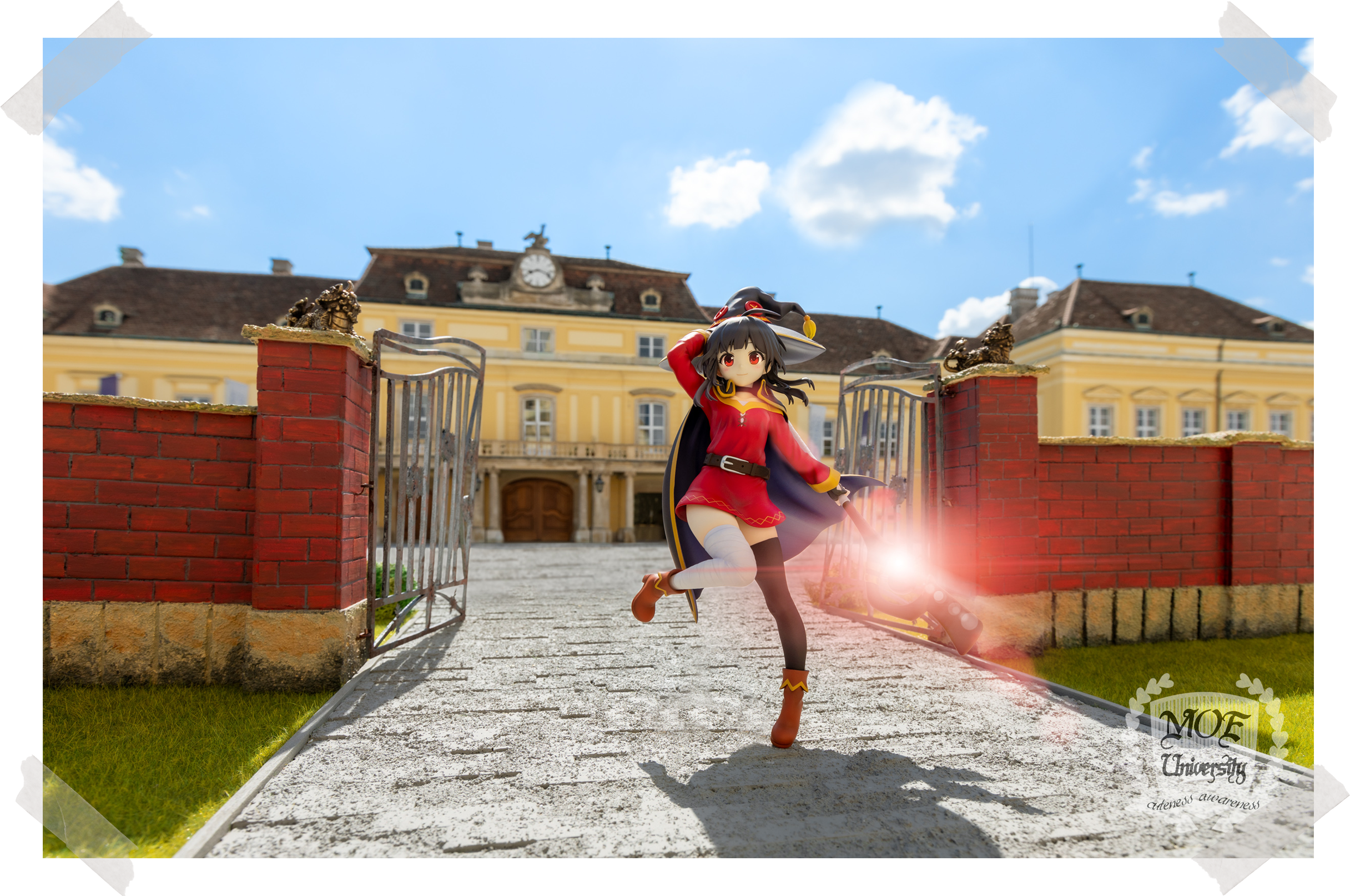 She has a normal translucent base rather than this weird splash of water glued to her butt. I always wondered why they made such drastically different bases for these two thematically related figures. From a collector’s point of view, it’s quite a shame that they didn’t release them on a twin base or something similar.

The model itself isn’t very detailed but I guess that’s due to her overall design template. At least the colors are vibrant and her facial expression is hella cute. Still, apart from the size I wouldn’t be surprised if a current Pop UP Parade figure of her has a similar quality to it. And of course, then you don’t have to pay those ludicrous “it’s special because it’s a limited run” after-market prizes.

As already stated in my other Megumin photo a couple month ago, to me Konosuba isn’t this must-watch, holy grail of comedy gold but I’m also aware that this is a bit of a hot take and that the series is still very popular. Even so that rumors for an upcoming third season started a couple weeks ago (wow, a photo project of mine that is relevant for once – that’s unheard of…”) when they cryptically announced a new project on a live stream.

Meanwhile the movie ‘Konosuba: God’s Blessing on this Wonderful World! Legend of Crimson’, that was originally released in a pre-pandemic world is still the last piece of animated content featuring its colorful cast of wacky characters. But I’m pretty sure, since there is a ton of unexplored source material in form of light novels, the release of a third Anime season might be not a question of if, but only when.

When I started production for this set, I was still baffled on how good the Rabbit House diorama turned out to be. But the saddest part of this state of mind is, that your inner voice will tell you to outdo yourself with your next project. Therefore, I had the crazy idea to build the entire mansion from the show as a background for this photo. But I quickly realized that, even if it would only be a front, the prop would end up massive in size and costs. Plus, I didn’t want to spend that much time and effort in a contraption that might end up as a blurry piece of backdrop in just one photo.

Also since summer isn’t my most productive time of the year, I focused all the love for details into the brick wall with the iron gates as an entrance to the mansion. Since I’m a bit of a cheapskate when it comes to new tools and crafting materials, I don’t own any fancy machinery like laser cutters or 3D printers yet, but recently I finally treated myself with a hotwire cutting table and this project was it’s debut. The core of the brick wall is just plain Styrofoam and let me tell you, cutting Styrofoam with a hot wire is such a satisfying feeling.

The baseplate for this setup ended up a bit larger than my average projects and therefore swallowed a lot of expenses in the form of artificial grass and pumice paste. But in hindsight it was totally necessary since I had to shoot this on location with a real castle in the back by using an ultra-wide-angle lens. When it comes to figure photography it’s very rare that I leave my studio and even rarer that I switch to another lens other than my trusty 50mm on a full frame body. Because under normal circumstances this will deliver the most natural looking compositions. But this project called for a little change to my usual setup and so it happened that on a sunny late morning I was lying on the ground in front of an old residential palace, while irritating passers-by.

And what should I tell you? I’m still not a fan of outdoor shooting. You have to take extra time out of your schedule, search for the perfect location, wait for the ideal weather conditions, constantly fight against the wind while lying on the floor, not being able to see jack shit on your cameras small display. But if you pull through, eventually you might end up with a somewhat presentable photo. 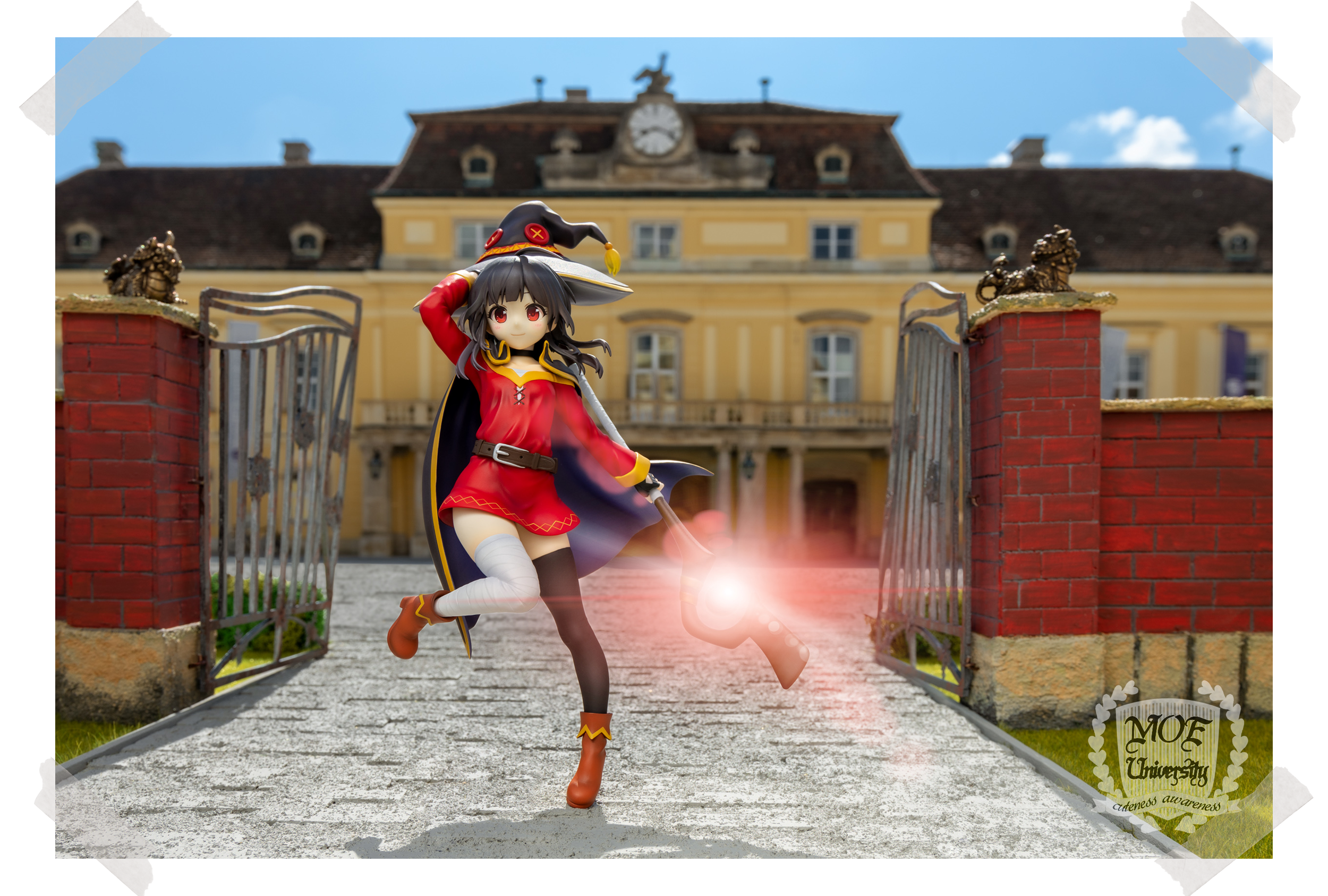 Time and effort: Building the brick wall was a bit time-consuming since I had to apply many layers of paint but since the castle was already build for me in the seventeenth century the ultimate effort this project took was just mediocre.

Costs of the props: Even though my day job allows me to obtain things like Styrofoam and wooden plates for free the crafting material like the fake grass and stone paste I used for the build wasn’t cheap and because of its size I had to use a lot of it.