Just blame it on the huntsman

I made this weather house that normally functions as hygrometer while also being a decorative element. ‎Sadly, this replica that houses Ram and Rem (Rem would be the one indicating rain) doesn’t actually predict the weather, since there is no catgut cord inside but it’s a great conversation starter, I guess.

I had those two Nendos on my wishlist for a while now because I wanted to use them for this project. But I also wasn’t in a rush and sadly most of the offers you will get on MyFigureCollection are located in overseas and also prices are usually not really cheap, since people on the site have a good knowledge about the aftermarket value of figures. But eventually an ad popped up and had a good Euro price, so I decided to look into it and to my surprise it came from a friend of mine in my area. Therefore, I was able to get both Nendos for a fair price while also saving on shipping and transaction fees.

If it wasn’t for this very project I wouldn’t have bothered with this 2018 release, since I’m not a huge Re:Zero fan nor are the models that exiting. Basically, it’s just a color swap of the same mold that is sold as a double pack to make it seem more special. I know that they had to work within the limits of the original design from the show but compared to more lavish Nendoroids with tons of accessories this childhood versions of Ram and Rem are definitely more aimed towards fans from the show, rather than the average collector. 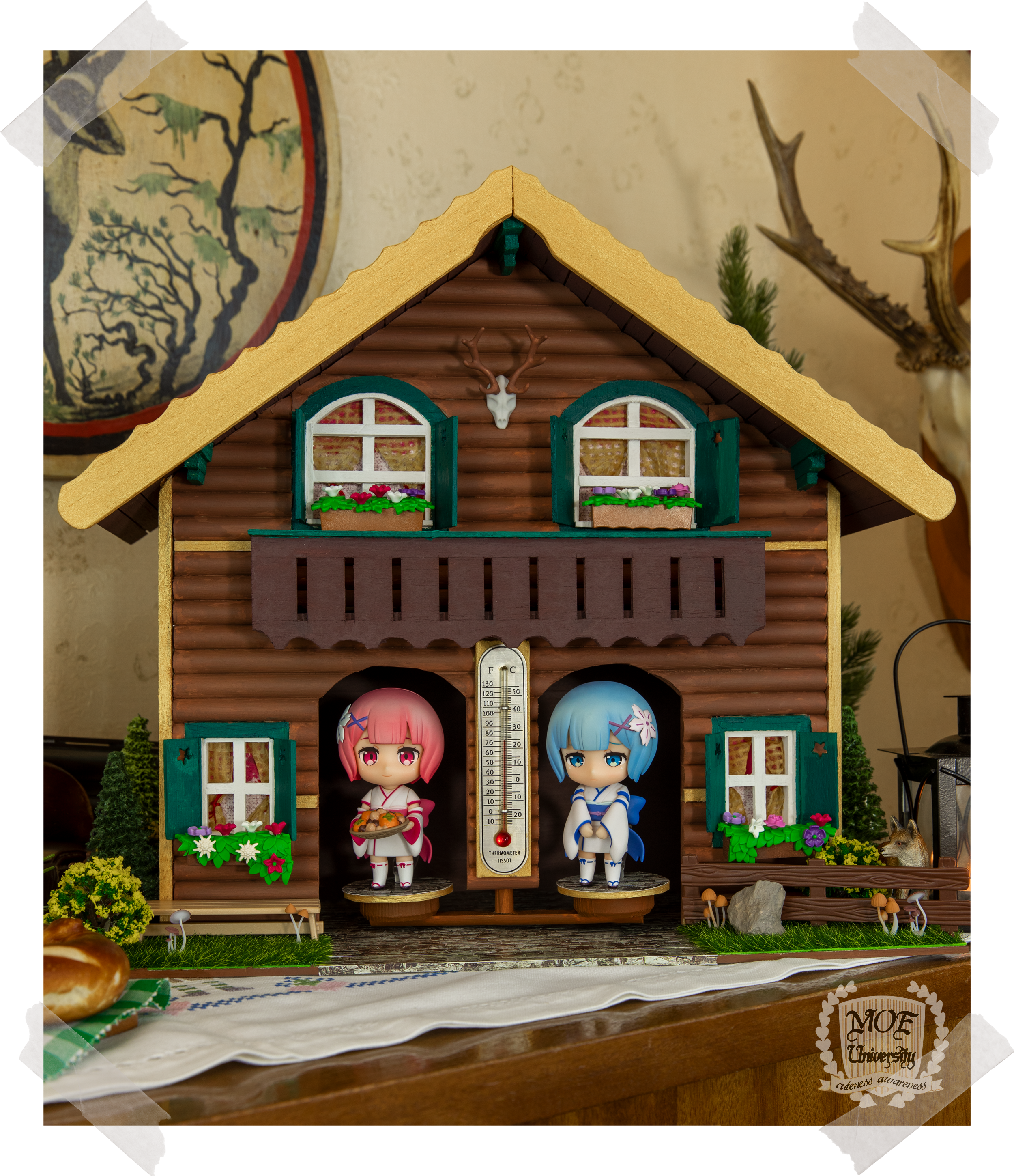 It was neat to see that they made this special folding box with matching prints on it but other than that there is nothing much to talk about. You only get one additional face plate for each character that also includes the front part of the hairstyle. One is without the white blossom and it’s advertised that you can mix and match the faces with the adult versions of them. As for other accessories they only come with a few arm pieces, a basket with vegetables and a special piece that allows you to connect both figures as if they are holding hands.

I’ve already wrote my feelings about the show in general when I did the “Remifications” blog entry earlier this year. In the meantime, they apparently concluded season two but as mentioned in my previous article I already tuned out by the end of the first season and sadly the effects of COVID-delays are much more frustrating when a shows has a running narrative with many open story threads.

I think the childhood version of Ram and Rem was only featured in one or two episodes of the first season while revealing the backstory of those two characters. Normally I’m not a big fan of flashbacks, especially the ones that take up a whole episode of any given show but this one was surprisingly powerful and well handled. After it I was much more intrigued in the story as a whole. In general, I would say that the fist half of the show entertained me much better than the second half did. Of course, I can only speak about the first season and with no regards to any of the novels or other spin-offs.

After I nendofied my nativity scene two years ago, I was thinking to myself what other folk art objects could benefit from mixing them together with anime figures. Then I remembered the time when I bought a small weather house at our summer resort as a child and thought to myself making one on my own would be a lovely crafting project. Since I wanted to use an iconic pair of characters, I narrowed my options down to this childhood versions of Ram and Rem. Not only are they perfect because of their matching outfit and overall appearance, the fact that they are a bit smaller than your typical Nendo also helped me to keep the house as compact as possible. The concept of a weather house with anime figures could of course also be done with Figmas or even scale figures but then the body of the building would be massive. Also, I could only use characters that have a tame hairstyle and a slender body because I wanted to keep the doors as narrow as possible.

Design wise I followed the art style of a normal weather house that is almost always depicted as some sort of alpine chalet made out of wood with a hefty dose of kitsch. I also thought about a style that would match the used characters (like a Roswall Mansion weather house for example) but ultimately, I went with the classic look because I found it more iconic. Sadly, the hygrometer part of the house is not functional. There is a little knob on top of the roof and you can still move the seesaw if you turn it, but since there is no hair installed that would react to humidity it won’t move on its own.

I don’t know if it would have been even possible to take the normal working method of a weather house, where the catgut has to only push a tiny piece of plastic with some small figures on it and scale it up, so that it would support the weight of two Nendos. I honestly had my doubts and even if the function would have worked you have to place it outdoors and since neither the building materials nor the figures themselves are made for that I decided to not chase this idea any further.

For some of the decorations I used Playmobil parts from a preexisting chalet set. This is now the second time I had to use Playmobil items in my figure photos. They actually have a good dollhouse scale, are cheap, widely available and since they also want a piece of that sweet, sweet AFOL pie, they release more and more sets that look half decent and could go very well with some Nendos. 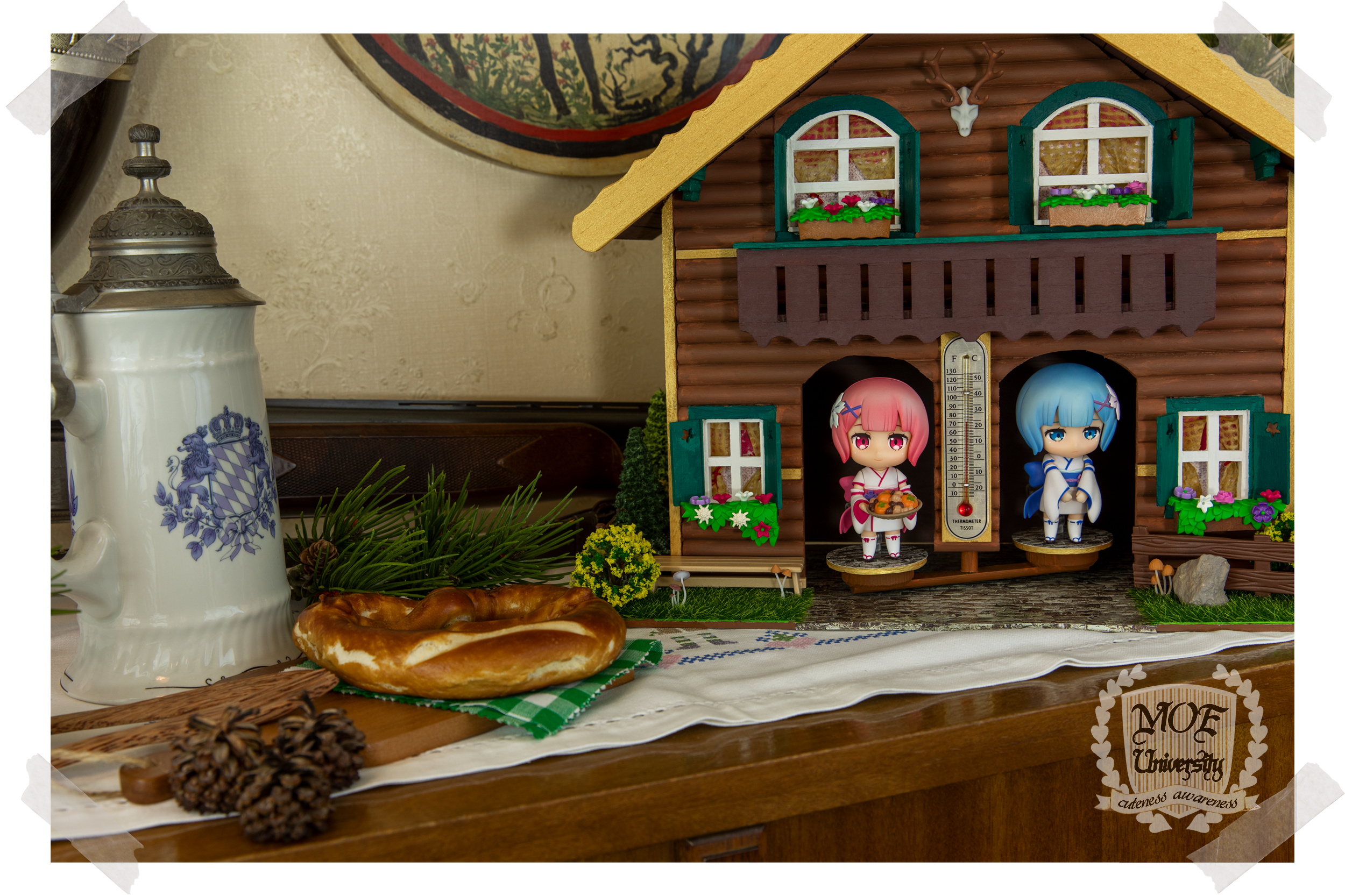 The photo itself was taken at a neighbor’s house who was into hunting and stuff. So, the whole place is decorated with things that accompanied my weather house pretty well. Still, it’s not a classic figure photo where you try to achieve some convincing scenery by using light and skill, but rather a product presentation of the house itself. It would be cool to build those on commission but since it’s not really functional I don’t know if many people would be interested. Also, I couldn’t find any suitable small thermometers for the front part. The one I used for mine is a one-of-a-kind that I got from my grandmother and is probably older than I am.

Time and effort: It was a nice build and surprisingly didn’t take that long. And although I made a mockup first to check the proportions and painted the whole thing while it was already fully glued together, I could finish it earlier than expected.

Costs of the props: I had to buy the mentioned Playmobil parts in a cheap set from the aftermarket and also the structure gobbled up quite some wood strips that aren’t exactly cheap. The weather house without the Nendos cost me approximately 40-50 Euro to build and decorate.