Thick girl in a small world

“The drought is coming, but for now the sky is bright. The perfect day for adventure!” – Reisalin Stout

Returning from an adventure in the big city, Ryza is back in her hometown and apparently, she has also grown quite a bit. One could say that this set, bases on artwork of Ryza’s home is way too small for a figure this size and that she is fighting with the borders of the image section. Or we could say that this is some sort of forced perspective and call it a day. Your choice.

Released in summer of 2021, this 1/7 scale figure of Ryza by Wonderful Works is a direct follow-up to the version of part one of the videogame, that was releases a few weeks earlier by the same company. Both of them look amazing with great details and are further entries in the long line of high-quality Atelier figures. For some reason this IP gets all the love when it comes to ornate and expensive scales. 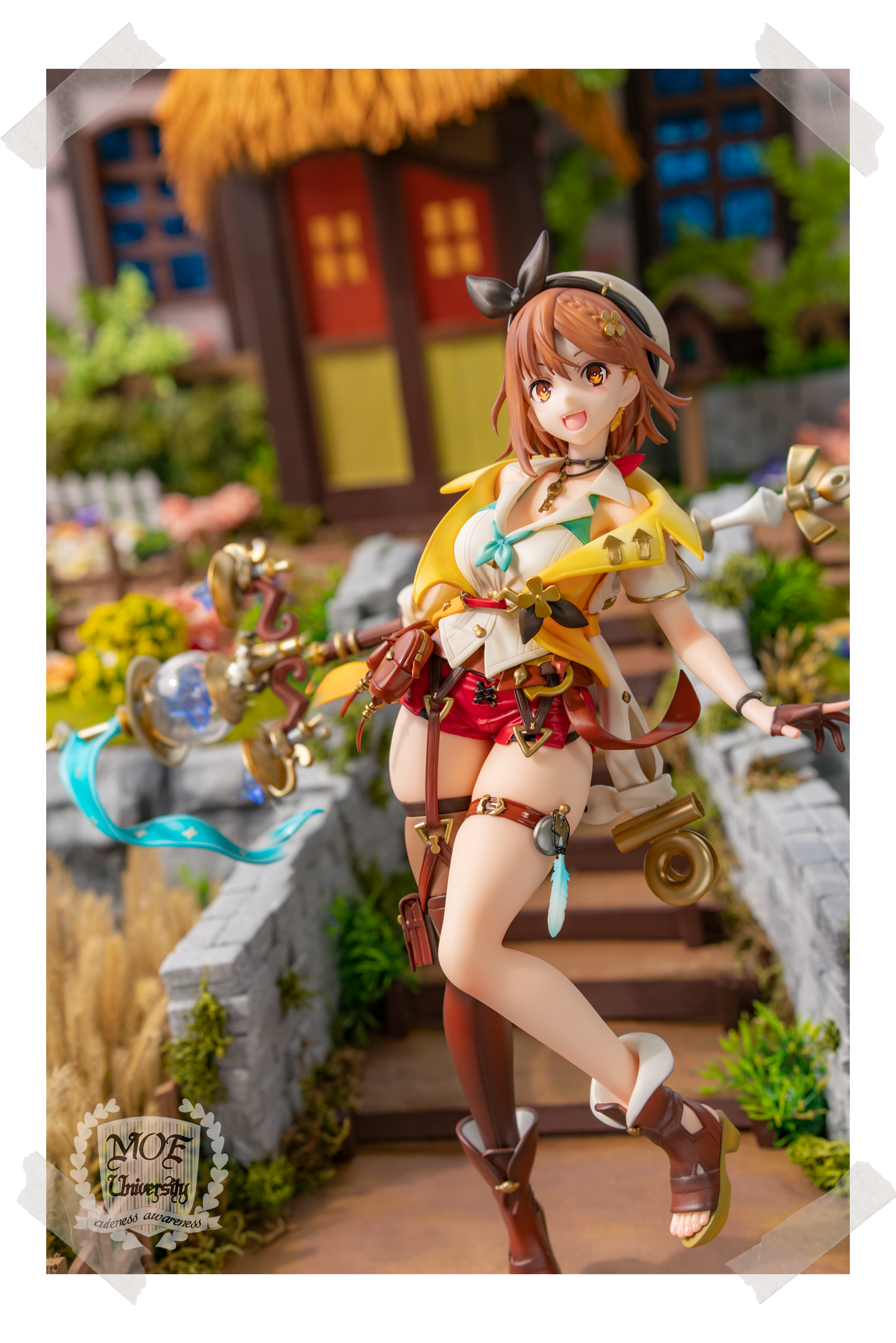 Since I already did a somewhat in-depth video review for this figure, I will keep this section brief. I do like the character design of Reisalin quite a bit and therefore the announcement of those two back-to-back releases caught my eye. Nevertheless, I like the pose and facial expression on this version better than the one in her “Secret Hideout” outfit. Therefore, I only pre-ordered this version. I also do prefer tall, dynamic figures in default outfits, therefore this one was right up my alley. Even though it was a relatively expensive purchase and my expectations where high I wasn’t disappointed by the final product.

I haven’t played any Atelier game in a while but vibrant characters like Ryza give me an urge to try out the newer titles in the series. Maybe I will give “Sophie 2” a try, since the first part was the last game where I finished the storyline. I really like the visuals of the more modern titles and I’m curious to see if they could manage to make the cell shading a bit more convincing. 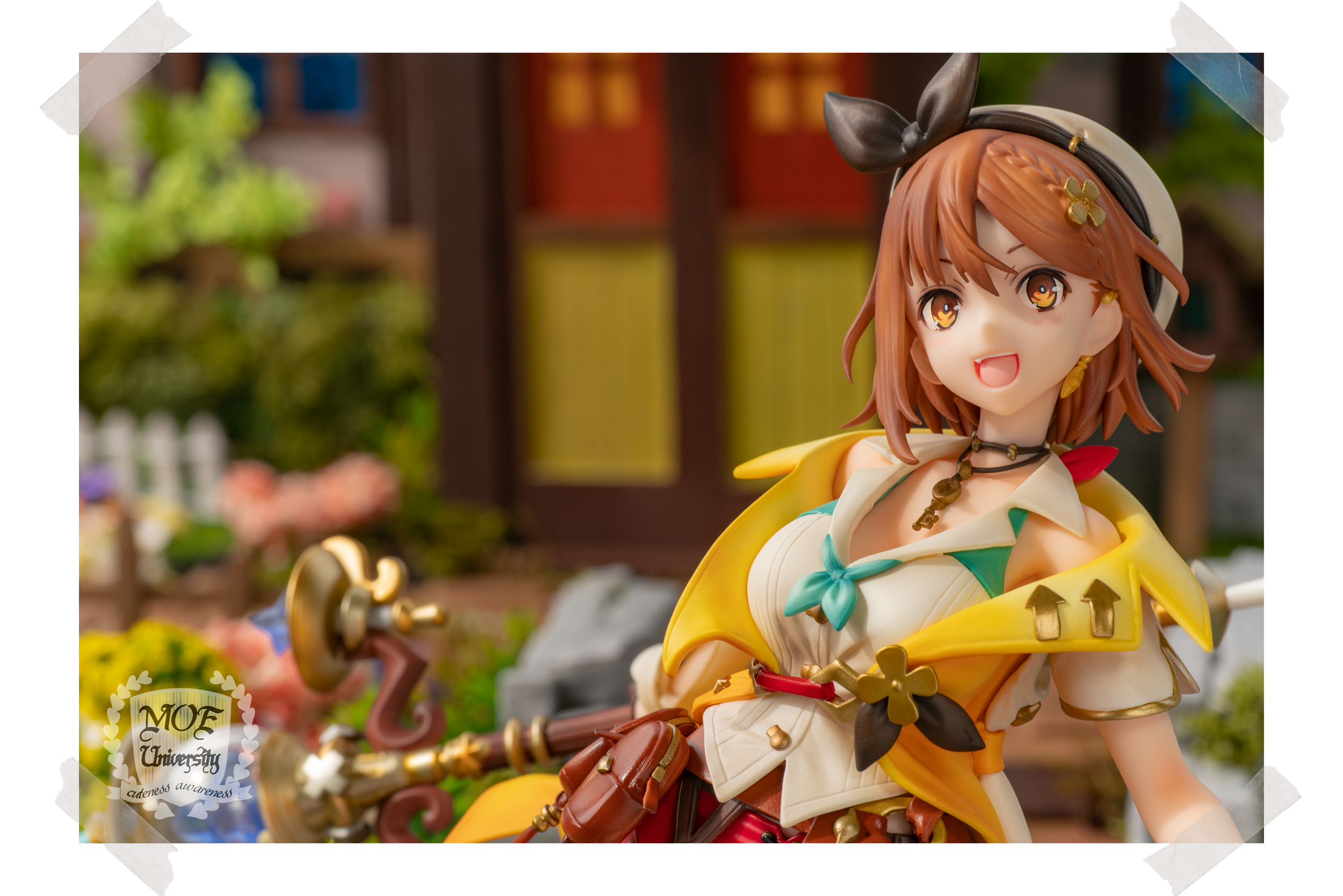 When the games emerged to the new console generation with Atelier Sophie back in 2016 everything felt a bit stiff and way too shiny. But seeing how the anime look was pulled off in games like Genshin Impact gives me hope, that the newer entries might utilize the graphic engine a bit better.

Once I preordered this figure, I knew I had to put some effort into making this photo to do her justice. I was also kina hesitant, since the way she is mounted on only one foot with such a high angle of attack made me question if it would even be possible to put her on a set like this.

Also, since I opted to go for an outdoor scenery, choosing the scale of the props was way more difficult compared to a setup that resembles a closed space like room. Take for example this picture of Ram I took earlier this year. The overall scene can be detailed but ultimate the wall will enclose your composition and you don’t have to think about perspective in the background anymore. Now take a look on another photo where I also tried to create an outdoor scene but failed in doing so. Compared to this shoot the buildings behind Nelke are still way too small and therefore the whole scenery looks kinda weird.

I was afraid that the same thing would happen in this picture and I’m aware that relative to the figure the surrounding elements are still not in scale. Even though the base structure is one of the larger sets I’ve ever build, it would be better suited for smaller models like Figmas or certain prize figures. Luckily, I was able to hide some of the deviations in scale due to a slightly elevated shooting angle and the raised background on a cliff. Combined with the depth of the scenery it looks convincing enough I guess and spared me from crafting even bigger props. 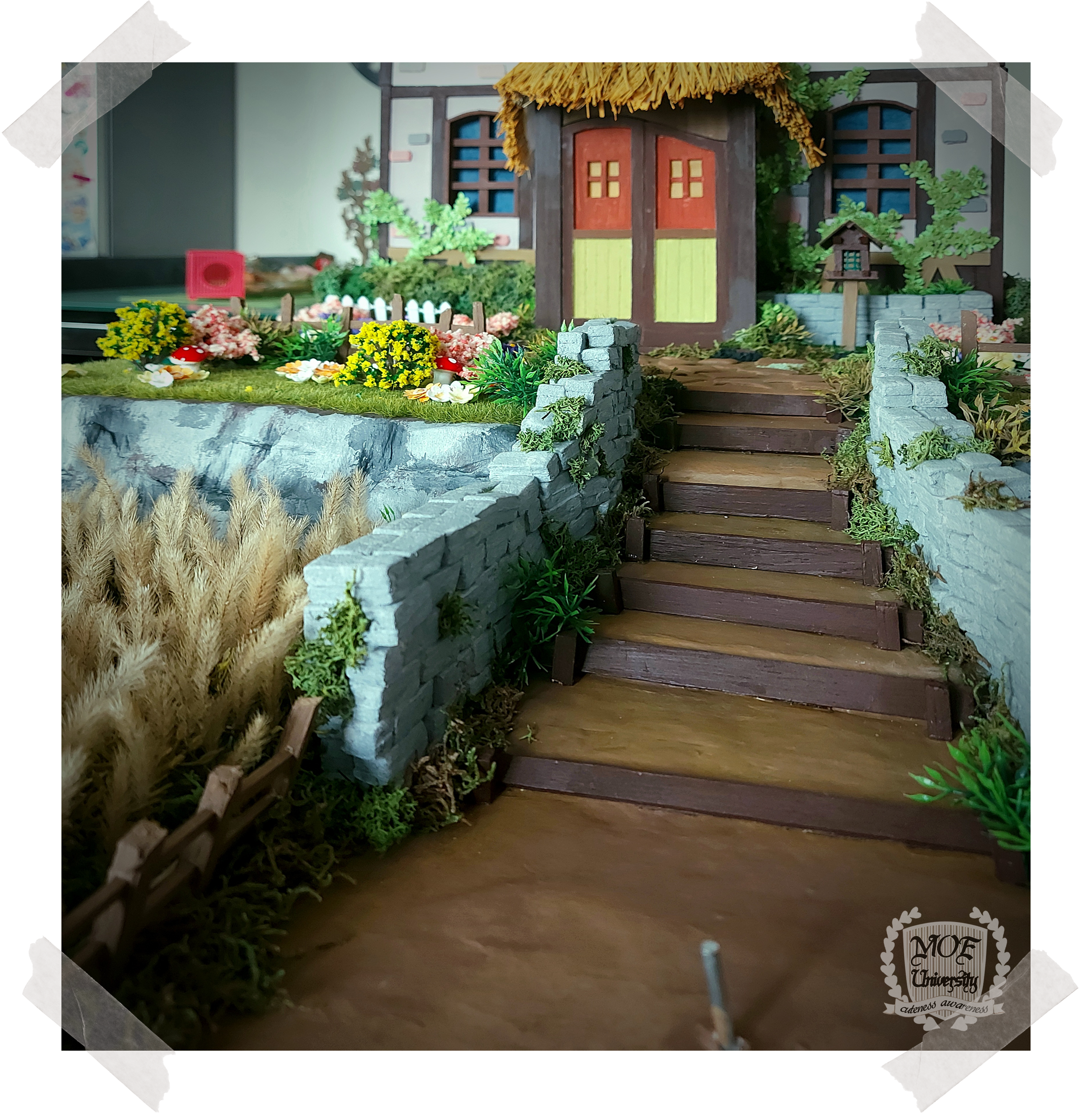 Sadly, I took no progress pictures when this set was in the making but honestly the techniques, I used to build it were not particular noteworthy. The base structure is made out of thick Styrofoam where I tried my best to cut a rock slope and stairs into it. After that I covered the area with some modelling clay and once it had dried out, I also painted it. The building in the back that should resemble the entrance to Ryza’s home is also just a front, made out of cheap materials like cardboard and balsawood.

The whole scene finally came together after I added some greens and smaller things like the stonewalls and wooden fences. Since it’s an outdoor scene I also wanted to use natural light when recording but I knew that a contraption this big with a figure this filigree would not be a good combo for shooting outside. Luckily, spring is slowly kicking in and I ended up taking the pictures on a sunny Sunday on my balcony.

Time and effort: Once I finally stopped procrastinating and started working on the set, I was surprised how quick everything came together. The structure is big but ultimate has no real time wasters in it. With every step I took towards completion one could see some major progress which is extremely motivating.

Costs of the props: Since I get basic materials like Styrofoam or plywood for free from work the overall cost wasn’t particularly high. But still, the cliff swallowed a whole package of clay and I also used quite a bit of artificial grass and paint. If you add together all the materials it would also quickly add to about 30-40 Euros.