Oh Stronger, you and your obsession for crating beautiful kimono versions of beloved characters… When they announced their Hanairogoromo version of the main cast, based on fuzichocos illustrations I was blown away by the aesthetics of those figures and I almost instantly pre-ordered Miku. I mean look at this gorgeous kimono with all those detailed patterns. From the traditional Japanese flower elements, to the rich colors, and the semi-translucent parts, those six figures are truly capturing the artists vision. Since this is a set consisting of six separate figures which will be released over the period of 2016 to 2018, each one of them hits your wallet with around 11500 yen. Therefore, even with the current strong exchange rate against EUR or USD the whole set would cost you almost 550 EUR (650 USD) without any taxes, shipping. Provided you’re not overslept the pre-order deadlines.

But if you did order some of those, or maybe the complete set, by the end of summer 2018 you will own a true manifesto of today’s possibilities when it comes to figure sculpting. Even if the average height of over 20cm sounds tall, their stature is much more delicate than you might think, even for a 1/8 scale figure.  For example a large proportion of Mikus 23cm counts for her umbrella. Some of you might complain about the fact that the bases weren’t designed to form an even larger diorama when combined, but for someone like me, who couldn’t afford the whole set and probably never will due to high reseller prices, I’m quite happy that they designed each base as a separate unit, rather than a jigsaw-like plate that will sit on my shelf, doomed to be forever incomplete.

I already wrote about Miku Hatsunes origins in my “Deep Sea Girl” blog entry, so if you are interested, check out this other cool photo project of mine as well. In addition I could mentioned that if you are a fan of Vocaloid in general, there are indeed many Miku versions to choose from, but other Vocaloids fall a little short when it comes to high grade figures. So this set is definitely a great treat for the fans. Oh boy, where do I even start with? Let’s see…I pre-ordered the figure in fall 2016, saw it for the first time in Tokyo last December, got mine delivered in March 2017, took the photo in September and now the final pictures are uploaded. Why it took me so long to finish this project you might ask? Well, first I wanted to have the whole scenery to be made out of multilayered laser-cutted and printed acrylic glass. Just like the base of the figure. But after a quick extrapolation of the costs I decided to use printed foils on glass sheets. At least I thought I would. After spending countless hours of tracing the box art and doing the first test prints I quickly realized that my plan was meant to fail. Not only was it near impossible to stick the foil to the glass, without having air bubbles in it, the opacity of the print on the foil was just too transparent. 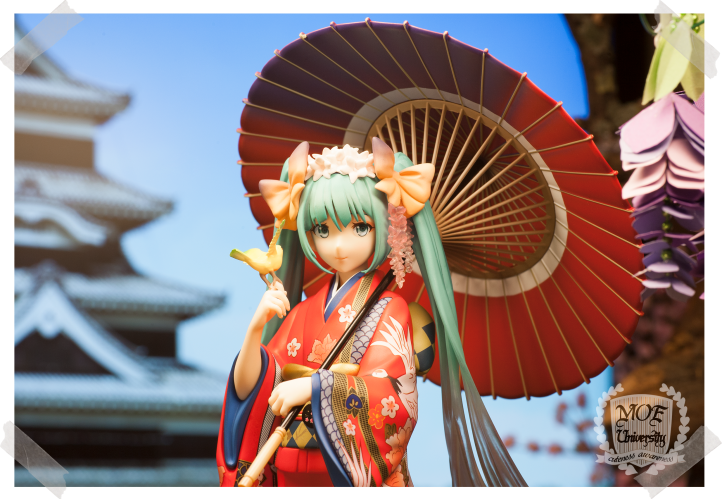 After this sidetrack straight into a dead end I overthrow the whole concept and decided to “simply” recreate the box art by using normal miniature props. And while doing so, I got lost in the process. Some of the miniatures like the bridge or the cat tails were very time consuming to build and on the other hand I had not much desire of being a toy photographer during the last couple of months. Well, let’s say summer isn’t my favorite of all seasons. When I finally had all things together and shot the picture in September, a local convention in Austria announced their figure photo contest and so I decided to contribute this project. Sadly that pushed the release of this article even further back. So after more than 4 months there is now a new blog entry on this website. Hopefully I can create some more regular content over the winter.

For your own good I will spare you the details about the failed acrylic glass attempt and jump right into creating the miniature Japanese moon bridge. Before I started with the final version, I did two drafts made out of cardboard. One smaller version and one in the scale of 1/1 whereof I also took the cutting pattern for the wood version. After I had a clear vision about the building process and all the pieces together I sawed them, glued it together and painted the whole thing.

Then I created the ground structure for the lake by using simple materials like cardboard and Papier-mâché. Together with some paint and smaller stones I created a riverbed where I poured in some resin. It was my first time using this material and I was rather nervous about the result. At first glance everything went well, but during the drying time the resin must had a reaction with the paint underneath and created this strange, olive-green pattern. But honestly I liked this new structure much more than my original paint job and so I pretended that this was my plan all along.

With the base structure and the bridge all the difficult parts were out of the way, so I started with the more simple tasks like creating the cat tail reed and the sakura trees in the background. And because only sakura blossoms would be too much of an cliché I also added some Wisteria petals to the mix, just like in the box art.

Once everything was crafted I built the complete scenery by using a monitor as my backdrop and the lamps of my photo table as a mount for all the Wisteria petals.

Well at least a smaller part of it since the space in my show case was very limited. Therefore I had to cut through all the resin and layers of stones while destroying all the cat tails and also wrecked two jigsaw blades in the process.  But after a little restoration it was as good as new and is now Mikus new home in my show case

And finally, here you can see the final picture:

Time and effort:
This project even beats out my Papercut Forest one. The bridge alone and all the drafts took me almost 30 hours to make. Cat tails and Wisteria petals another 20-30 hours. Altogether the whole scenery was created in 80+ hours.

Costs of the props:
I spent a few Euros on the plywood for the bridge and another few Euros for moss. But the biggest part of my 60 Euro budget was spent on the translucent resin. 1,5 Liter I poured into the miniature lake.